Regardless of your skill level, finding the best golf ball for your game can be difficult, especially when you consider quality, price, playability, visibility, and all the other factors that go into finding the right ball for you.

We believe the best golf balls for beginners are the TaylorMade Tour Response Stripe balls. They provide Tour-level feel, helpful 360° putting alignment, and a low cost to boot. 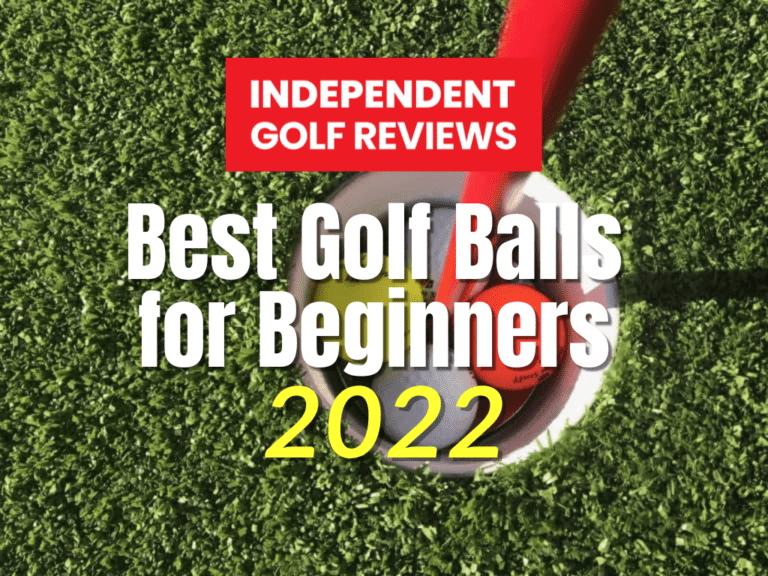 It is our hope that you can find a golf ball that inspires confidence and helps you shoot lower scores! We were sure to include premium golf balls for beginners as well as more budget-friendly picks (in case they are lost quickly). 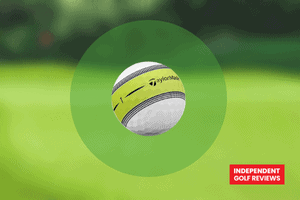 The TaylorMade Tour Response Stripe golf ball is our top choice for beginner golfers. The “Tour Response Stripe,” as it is affectionately referred to as, has four key features that genuinely benefit novice golfers and better players alike.

A bright, highlighter adjacent colored “stripe” alignment aid makes it easier to aim and align putts. This stripe is designed to give immediate feedback to players on the quality of their putting stroke.

The bright color choice also provides added visibility for easier finding in rough and other areas the average golfer finds themselves in.

The 100% cast urethane cover is designed to lower prices for consumers while also providing a Tour quality feel.

TaylorMade claims to use a unique urethane process to reduce scuffing and improve greenside spin.

TaylorMade found so much success with the dimple pattern on the TP5 and TP5x that they included it for the first time in their Tour Response line with the Tour Response Stripe balls.

This 3-piece golf ball has a “SpeedMantle” surrounding the low compression core to maximize energy transfer and increase ball speed. 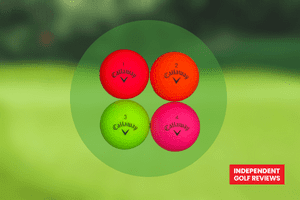 This Amazon best seller from Callaway is one of the best golf balls for beginners, without a doubt. The SuperSoft Matte’s color is so bright the balls are nearly beaming regardless of light exposure, so they are effortless to find. 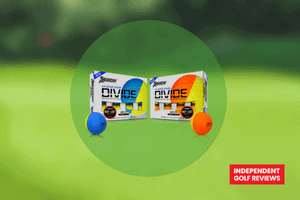 The Srixon Q-Star Tour Divide golf balls are for a beginner golfer wanting to get better fast. 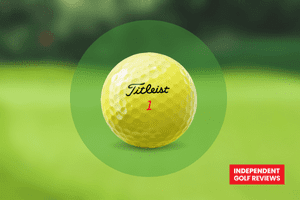 Titleist has long been one of the leading golf ball manufacturers on the block, but their products usually come with a hefty fee.

It’s a fact. The Titleist TruFeel’s “2.0 TruFlex Cover” creates the softest Titleist golf ball ever designed for the softest feel they’ve ever made.

The massive, fast “TruTouch” core and Titleist’s “376 Tetrahedral Dimple Design” work alongside each other to deliver more distance for players.

The all-new, extra thin “Tru Flex” cover on the TruFeel is designed to be ultra-responsive and provide tons of feedback on shots around the green. 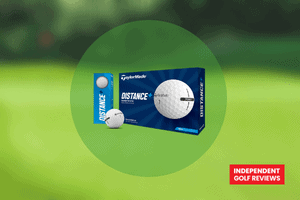 The Distance+ ball from TaylorMade is designed for high-velocity performance and increased distance on all shots.

Users commonly report a few extra yards after their first use.

The Distance+ provides a very soft feel through its 2-piece construction process while still being designed to increase ball speed and maximize distance.

The bold “plus sign” shaped alignment aid is a new feature to the Distance+ line. TaylorMade includes this to help players 1. Make sure they are aimed at their intended line. 2. Roll the ball on the intended line. 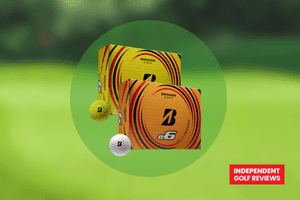 The Bridgestone e6 has been the brand’s leading seller since 2005 and is widely regarded as one of the best golf balls for distance.

The newly reformulated Bridgestone e6 has a larger and softer core for faster compression and more distance.

Players with moderate swing speeds seeking increased distance will benefit greatly from playing a ball like this.

Increasing the core size while also making the core softer makes the new e6 easier to compress. This easier compression boosts distance but might get squirrelly for faster swing speed players.

Bridgestone’s new e6 gives two-piece golf balls a premium feel and offers them in an “Optic Yellow” or a standard “White.” 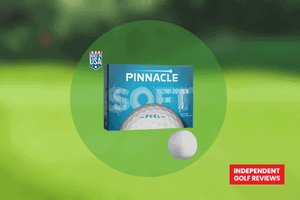 One of the best golf balls for beginners to break into the “soft” side of the ball market, Pinnacle SOFT Golf Balls are designed to give golfers an immensely soft feel and more distance to boot.

Pinnacle is excited to showcase their new and advanced “332 Icosahedral Dimple Design” that ensures players’ have a consistent ball flight and an incredibly soft feel. 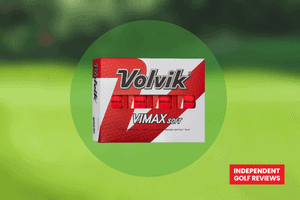 The soft core used in the VIMAX creates a softer feel and fast initial ball speed on drives.

The vibrant matte colors aren’t just to impress your cart-mates. Volvik says they designed their color scheme in the VIMAX golf balls to increase player concentration.

Besides the stunning Red color we have above, the Volvik VIMAX is offered in a bright Orange, Green, and Yellow.

In addition, players can opt for their choice of 30 color options on Volvik’s site. 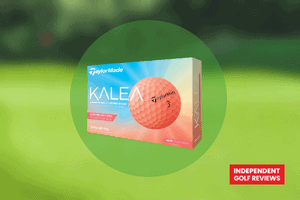 The Kalea Peach golf balls from TaylorMade are engineered to help lady golfers play their best.

A high-energy “REACT” core maximizes distance off the tee.

The soft ionomer cover coupled with the large “REACT” core creates an extra soft feel for increased control around the greens.

The dimple pattern used in the Kalea’s construction is designed to increase lift while the ball is in the air for more distance for players.

The Kalea Peach’s cover is UV protected and is also offered in a bright Purple or standard White color. 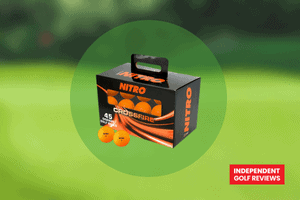 As “Beginner Golf Ball” as they come, the Nitro Golf CrossFire 45 Pack of golf balls comes out to well under a dollar per golf ball.

If you or the beginner golfer in your life tends to lose a ton of balls when they play, this would be a fantastic option.

Nitro says they use a solid 2-piece Titanium core in their balls to maximize the energy transfer from the club head to the ball. We cannot verify if that information is true, but these balls do sound like a bomb going off when struck purely, so this might be accurate.

Lastly, Nitro is proud of its aerodynamic and symmetrical dimple design that, they say, increases lift and decreases drag for higher, longer shots.

Besides the vibrant Orange color shown above, the Nitro Golf CrossFire 45 Pack of golf balls is offered in Red, White, and Yellow.

Get Golf Discounts & Giveaways from the top brands and stores in golf.

Sign up below to be automatically entered in this months giveaway.