Customized for Confidence and Less Strokes
The term “Strokes Gained” is a relatively new term to golf.  But it is basically a math equation that determines which part of your game is better, not just on the score card but on the course.  It factors into account more statics than just fairways, greens and putts.  It also accounts for the data associated with those stats.  For example on the score card a 3ft putt is the same as a 25ft putt.  But in terms of “Strokes Gained” the 25ft putt made means that you are a better putter.  I bring this up for 2 reasons, one the name of this new putter company is Strokes Gained, but also because I saw many of those 25ft putt drop with this putter.  So the fancy math tells me that this is one good putter.  Add to that the confidence of looking at this custom putter; this guy is  staying in the bag.
Neal Rohrbach and Jimmy Bales set out to create their own little niche in the putter market by offering classic designs, amazing finishes, custom stamping/painting and all of it done in the USA.  It isn’t rocket science, but it is a commitment to getting a quality, custom putter into the hands of a golfer.  They work out of their shop/studio in Summit Pointe, in Valdosta, GA,  They source their headcovers and grips right here in the USA too. 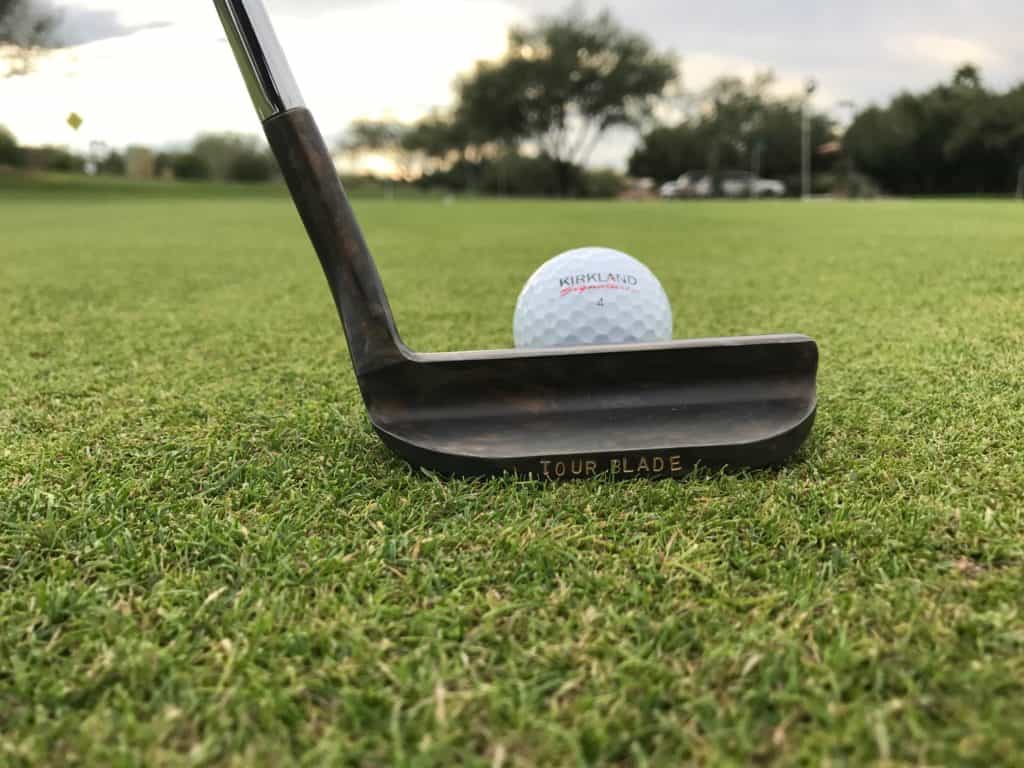 Strokes Gained currently has 4 putter models they are selling.  I’m sure based on what I’ve seen from them in the last few months, they will be expanding those offerings shortly.  I’ve recently gone back to a traditional blade style (8802) putter and have really liked the results in 2016.  The Strokes Gained Tour Blade is their version of that putter.  It is just slightly bigger than an “original version” of that style, but still their version is very compact and nicely shaped.  The bigger flange allows for the putter to have a little more headweight which is certainly nice and gives it solid feel.  The lack of alignment aid or fancy features gives it a timeless look. 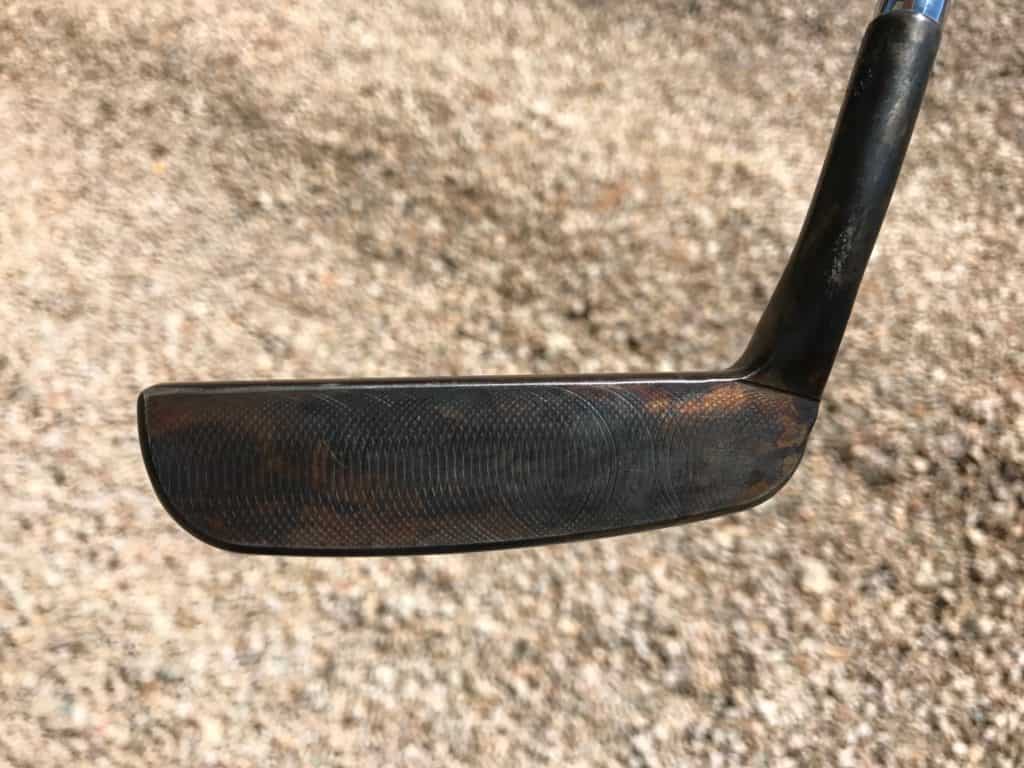 The Strokes Gained Tour Blade putter has all the finishing touches of a high-end putter.  As you can see from the picture above, their carbon steel heads have deep milling on the face.   The one area that they really surpass many other putter companies is their finishes.  I realize that this is really just about looks, but I love their finishes.  The “tortoise shell” finish on my Tour Blade turned out amazing.  A quick browse of their site shows off their other cool finishes.

They also offer custom stamping and paintfill.  They have some “stock” things that are part of certain models, but must have empty soles and bumpers for any custom work you might want.  I didn’t request any fancy stamping on this classic putter.  It looks great with just the few notations of the putter and company filled with gold paint.  The whole combo looks amazing. 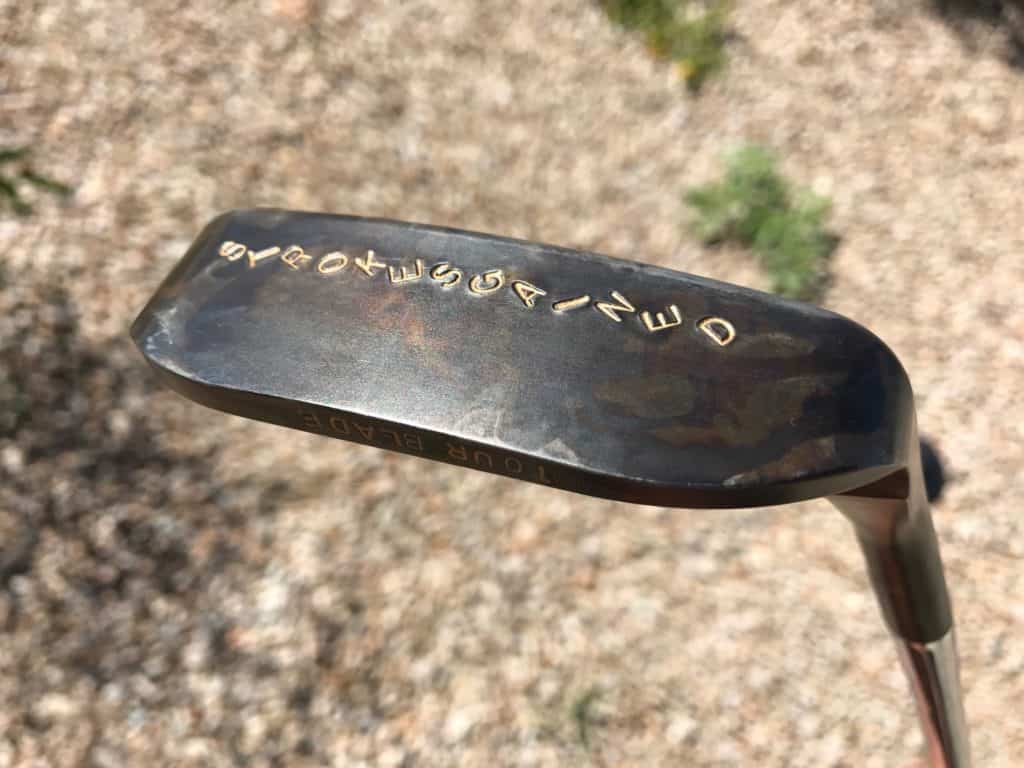 Visually the Strokes Gained Tour Blade Putter is amazing, but the feel and consistent roll are what will keep this putter in the bag.  I was really impressed by the feel of this carbon steel head.  It is very solid without being “clicky”.  The head design is solid and with the slightly heavier weight it feels like the perfect balance for putting.  While I don’t have any course records to show from using this putter, I certainly gained some strokes on the green with this putter.  Draining a few longer putts certainly gave me confidence with this putter in the bag.

Strokes Gained is doing things right and offers you some really cool options for custom putters.  Their classic designs, custom options and creative finishes are worthy of being the putter in your bag.   When you make it “your” putter through customization, it will give you confidence and help you gain strokes.