REVIEW: The Wedge by Cleveland Golf

A Golf Geeks Guide to Wedges
I don’t read books.  There I said it; I’m not one to take time to read a novel or any book for enjoyment.  There are many reasons why, but you’ll rarely see me reading a book.  So when a golf book arrives, I don’t necessarily dive in the first day I get it.  Even though the topic is of great interest to me, a book isn’t.  But after seeing this book on my desk for a couple months I decided to finally take the plunge and give it a read. It’s not laid out like a novel or has story line to follow, but more like a text book or encyclopedia of wedge information.  Surprisingly I’m glad I gave it a read; I enjoyed it and actually had a hard time putting it down because of all the information I was learning.  The Wedge by Cleveland Golf is a  Golf Geeks Guide to Wedges.
I’m not going to walk through all the details of the book, but if there is anything you don’t know about wedges, this book can fill in your knowledge gaps.  Its 175+ pages about every tiny detail that goes into wedge creation and wedge usage.  The basic message is get fit for your wedges and this book helps teach you what you should be looking for in that fitting.  The design, the metal, the grooves, the CG, the shape all play into getting the right wedge for your game.  The information in this book can help you understand all the details of the wedge.  Obviously it has a slant toward the Cleveland wedge brand, but much of the information is valuable across all brands.  Even if you think you know it all about wedges, I’d still suggest giving this book a read, I’m guessing even a golf geek can learn something.

If you want a copy of the book here is more info: http://www.clevelandgolf.com/en/cg-paperback-wedge-book/11704217.html 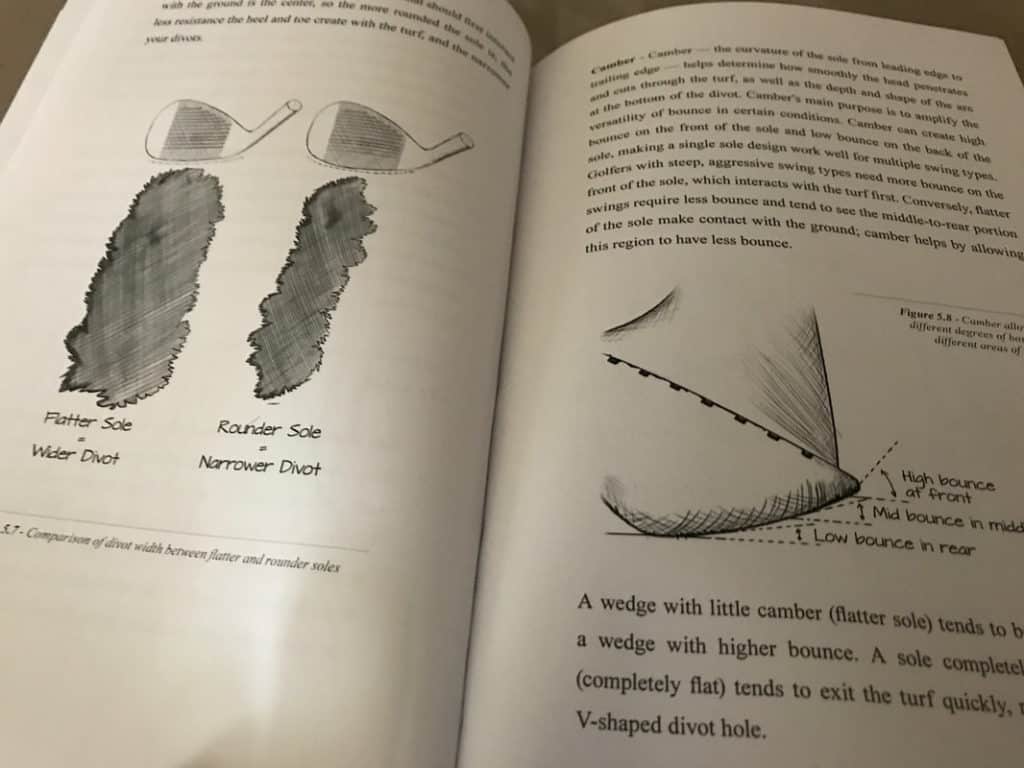 No golf company has more experience crafting, customizing, and innovating for a single dimension of the game like Cleveland Golf with the short game. In 1979 we made the short game matter— our innovation was the start of short game science, engineering, the tinkering that’s commonplace with manufacturers today.

1. The Wedge by Cleveland Golf is a great book, but if you had to sum up 1 key thing to look for in a wedge fitting, what would it be?
The hardest question in regards to almost anything is ‘can you boil it down to one key thing.’ Given that it is a really difficult question that I could answer in any number of ways, I will chose to answer from the perspective of the largest population of golfers – the golfer we would call mid-handicap. That is probably a loose term and I might count anyone that shoots 80-105 into that bucket. The main problem with that bucket, and in turn the #1 key to wedge fitting, is that a golfer that shoots 83 is playing an entirely different game than the golfer that shoots 105. Accordingly, they should not be using the same wedges even if those wedges have the right bounce, gap spacing, and lie angle. For the mid handicap golfer, the most important part of a wedge fitting is getting into the right model for their game. If you struggle to break 100 and really struggle when you end up in a bunker you should be looking at a Smart Sole type product. If you are really close to shooting in the 70’s you need the versatility of the blade wedges that are designed around Tour player’s needs. For everybody in the middle making the correct choice between Smart Soles, blade wedges, set matching wedges, and (probably the best choice) game-improvement wedges like the Cleveland CBX, will have the largest effect on their performance and is the most important part of getting fit.

2. There was some discussion about CG in the book, and the new wedges have “feel balance technology”  but I’d love to hear more about how Cleveland is moving the CG since there doesn’t appear to be any visible clues like ports or weights?
Probably more than any other club in the bag, wedges are as much art as they are science. The art component comes from the need to make the club look ‘perfect’ at address. Getting the offset right, getting the leading edge right, getting the hosel transition right, are all key features driven by player preference rather than scientific evidence. Unfortunately, years of making wedges suit the player’s eye has led to some fundamental problems with the center of gravity. The big long hosel and the lack of a cavity have created a generation of wedges where the center of gravity is significantly to the heel side of the center of face. Better players subconsciously figure this out and end up making contact a little heel side of center, but average golfers hit all over the face. As a result of the heel based CG, the result for average golfers is a shot that goes really long off the heel and really short off the toe rather than a uniform distribution. This makes it really difficult for golfers to get consistently accurate shots. Our goal at Cleveland Golf has been to make incremental changes with each generation of wedges to move that CG back to the center of the face. To get there we need to hide as much of the change as possible using technologies like a secondary hosel bore, and slowly get golfers used to the change in shape that cannot be hidden. With each generation we are getting closer and closer to center and we are seeing the improvement in results for golfers at every level.

3. Who are couple of the great wedge “influencers” of the past and present?  What have they brought to the game of golf?
One of the notes that we made in the book, and a point that I regularly make to people, is that making a great wedge is not a one man operation. We have several engineers, multiple designers, a room full of CAD technicians, lab technicians, tour reps, and 1000+ testers who all contribute to a new wedge. Anyone that suggests a single person is making the wedge is either being a little disingenuous or is making a pretty poor wedge. With that in mind, all the real influencers go way back. Gene Sarazen and Edwin Kerr MacClain (who gets far less credit than Sarazen) were the original fathers of the wedge and we aren’t having this conversation without them. The other obvious one to me is our founder, Roger Cleveland. I think his biggest influence was not in a specific wedge technology, but rather in his approach to the PGA tour. During the early days of our company there weren’t tour reps supporting the players at every event. There weren’t trailers with all the equipment necessary to build and modify a club. Roger was one of the first to go out to tour every week and work with the players. He was one of the first to work with players individually and modify clubs to their needs. I think his real influence was that he helped change the way manufacturers handle tour players and that whole side of the industry.

4. What is the biggest challenge that Cleveland faces trying to make new wedges each year?
Another tricky question and I will take a direction you may not have intended, so let me know if I missed the mark. One of the biggest struggles we have as engineers designing new wedges is that there are millions of golfers, and those millions of golfers are all a little bit different. In some utopian golf future, we would make a unique wedge for every golfer that matches his needs, his swing type, his playing style, and where he plays. Unfortunately, that is not possible and as a result we can never make as many models or options as we would like. This year is actually a milestone for the R&D guys because with the Cleveland CBX 2 wedges, we were finally able to make a game improvement wedge that will really help that 10-20 handicap golfer make better contact, have more success, and shoot lower scores. In the past, we have been constrained by the ‘needs to be tour approved’ type mentality that is always part of the art side of wedges. By taking the handcuffs off and really focusing on what a 15 handicap golfer needs we have a whole new pallet of ideas and designs to explore.

5. What wedges are in your bag and why?
Since I work in the golf industry and I work on wedges, I never have one type of wedges in my bag. I have access to everything, so I am always experimenting with stuff. I am anywhere between and 8 and a 12 handicap depending on how much I have been able to practice my putting. My wedge game is solid but unremarkable. I can get on the green 99% of the time from anywhere, I just struggle to stick anything close enough to go up and down regularly. I need wedges that offer me some versatility so that I can execute a wide number of shots but a little bit of game improvement to help when I subtly miss. For me all of that combines into the RTX3 wedges in the CB version for the bulk of the time. When I play a course that is a little more challenging (i.e. thicker rough, smaller greens or longer holes – meaning more shots from off the green) I switch into a set of Cleveland CBX wedges. When the course gets tougher, I like to think I am smart enough to give up a little bit of versatility for all the added forgiveness, though my teammate in the company golf tournament might disagree.