In short, the TP5 has more spin around the green and the TP5x has the longest distance.

TaylorMade TP5 is the softest ball TaylorMade has ever produced and has the most spin around the greens, and the TaylorMade TP5x is TaylorMades lowest spinning and longest ball they have ever made.

Regarding relative users on the PGA Tour as of the last few years, there has been no more significant competitor to the iconic ProV1 than the TaylorMade TP5 and TP5x golf balls. 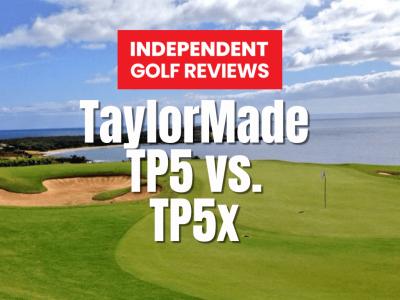 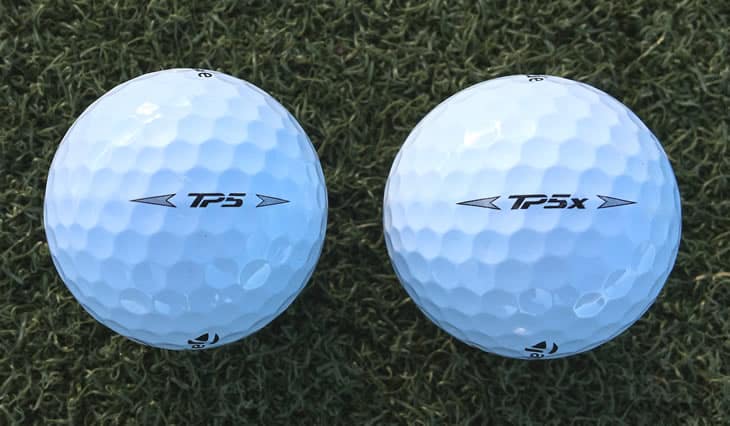 In a more digestible form below, we’ll break down the key differences between the TP5 and TP5x golf balls, as well as our opinion on what type of player will benefit from either ball.

As a lifelong ProV1/ProV1x player, writing this almost feels like cheating on a partner, but here we go. In direct hand-held comparison, the newest iteration (2021-22 version) of the TaylorMade TP5 both looks and feels different than older generations, thanks to an upgraded version of TaylorMade’s “soft cast urethane cover.”

A “soft cast urethane cover” is a fancy way of saying the ball’s outer layer is constructed with extra tough, yet ultra-thin and soft urethane. This outer urethane cover has been revamped to be more durable and provide a slight distance advantage compared to the previous generation of the TaylorMade TP5.

TaylorMade says their new “Tour Flight Dimple Pattern” featured on the TP5 and TP5x contains a 322-dimple pattern engineered to improve ball flight aerodynamics and carry distance. The “shallow” overall dimple reduces the golf ball’s “drag” during its ascent to the apex, then the “steep walls” maintain lift and keep the ball airborne for longer than older generations.

Most simply put, and from TaylorMade themselves, “… if you prioritize wedge spin over distance, the TP5 is the golf ball for you.”

While the TP5 is the highest spinning ball TaylorMade produces, it is built like the TP5x to be low spinning off the tee with the driver to keep control high and help players find the fairway more often. In fact, to boost the speed and distance of the TP5 to keep up with the TP5x, TaylorMade has introduced a larger and more reactive core than the previous generation TP5. The larger core was designed to store and release energy more efficiently, delivering a springing effect off the driver swing to increase distance and speed off the tee.

You must figure out what category of player you would put yourself in, as this will most easily help many golfers decide between these two balls from TaylorMade. As a player who prioritizes short games and more precision around the course, I would categorize myself as a player with a “spin and feel preference” over a pure “distance preference.” The incredibly piercing ball flight produced with the TP5 boosts it above many premium balls (including the TP5x) for my game.

We’ve explained the TaylorMade TP5 is designed for more greenside spin, less distance, and more control, so shouldn’t the TP5x be the opposite of that? Of course, it can’t be that simple.

The TP5x from TaylorMade is the lowest spinning ball the manufacturer produces, but the TP5 and TP5x are extremely close distance-wise with the driver. Users will find a firmer feel with the TP5x and slightly more distance than the standard TP5, but how the ball actually feels to users will vary from player to player. To me, the TP5x feels about twice as “hard” as my standard ProV1 and the TP5. Also, if you’re into acoustics and sound-related shot feedback, the clicky sound of the TP5x is very different than the more muted sound of the TP5, and which one you prefer is entirely personal to each user. The newly remodeled cover on the TP5x is first noticeable visually in the changes made to the dimple pattern. Both the new TP5x and the TP5’s dimple design were tweaked to provide a more shallow dimple depth than previous models, yet with higher “walls” between dimples. While those things may sound like they contradict, TaylorMade has found these factors work together to provide between 100 and 200 RPMs of spin to users of the TP5 and up to 300-400 more RPMs of spin to users of the TP5x while also providing a softer feel to users for even greater greenside spin and control when directly compared to the previous model of the same ball.

The TP5x golf ball from TaylorMade is unique in the fact it’s constructed with five layers. From the core outwards, increasingly stiff layers are added until the outer cast urethane cover is reached. TaylorMade has found this design approach leads to the best performance off the tee without sacrificing feel on scoring opportunities.

The TP5x shows its most significant difference in upgrades in direct comparison to its own previous model/generation! The previously mentioned TP5x’s softer cast urethane cover increases groove interaction on each shot and adds an extra level of greenside spin compared to the previous TP5x. The updated TP5x provides more spin while maintaining the speed and distance off the tee and with irons that made PGA Tour players take notice of the Tp5x to begin with.

The previous 2019 model of TP5x was notorious around high-level players for its “overly clicky sound” and lack of greenside control, making players like Rory McIlroy and Dustin Johnson switch to the TP5. After the 2021-22 redesign, however, players like Tommy Fleetwood, Jason Day, and Rickie Fowler (three players known for fantastic wedge shots) and even former users Rory McIlroy and Dustin Johnson have returned to the TP5x!

If you’re the type of player who prioritizes more distance, a higher ball flight, and a slightly firmer feel, the TP5x will be a perfect golf ball for you. While you may find less spin than the standard TP5, I still encourage you to test the spin rate yourself, as the TP5x has jumped the “Tour Preferred Golf Ball” list in the last year or two.

Which Ball Should YOU Play?

I so desperately wish this question could be answered as simply as, “If your driver swing speed is “x,” play TP5x golf balls.” but in reality, it’s not that easy of a problem! Below I will break down my thought process behind selecting a golf ball and how you can find the best ball for your specific game.

If you possess enough speed, the TaylorMade Tp5 and TP5x are premium balls well worth your consideration. If you play or live in a higher wind area, the lowered ball flight of the TP5 would gain a slight edge over the TP5x golf balls. If you struggle to flight your ball lower or are playing with the wind in your face consistently, the TP5’s more spin could cause shots to “balloon,” and you can lose distance.

If you tend to be a bit more steep in your swing, tend to cut the ball, or have a faster swing speed than most average golfers, the TP5x golf balls would be perfect for you… to test!! Having a steeper swing and cutting the ball increases iron spin and spin in other areas where it’s actually more of a hindrance than helpful. The new softer cover and a softer feel around the greens make the updated TP5x feel like an entirely new ball compared to its predecessor.

If you’re seeking a bit more distance off the tee, with your fairway woods, or with your irons, the TP5x would likely be an excellent ball for your personal game.

"How I Test a Golf Ball" with @scramblingTom

Every player needs a ball they can depend on in “crunch situations” when the pressure is at an all-time high. Hopefully, my personal ball testing routine can help you find a ball that will help you play and score better in your upcoming rounds!