What is an Ace in Golf?

An ace in golf is also known as a “hole-in-one,” it is a single shot from the tee-box that ends in the hole.

No mulligans or second tries allowed.

Accomplishing an “Ace” is often regarded as the greatest and rarest achievement a golfer can attain. 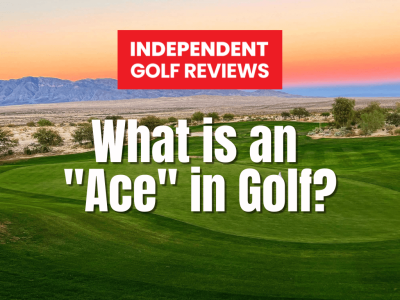 When you’re talking about an ace or hole-in-one in golf, there’s not much more that needs to be said. Usually, aces come on par 3s – holes that are generally around 200 yards or less.

When that’s the case, an ace is also classified as an “eagle,” or two shots under par for the hole. And while an eagle is a great score, it pales in comparison to the grandeur of an ace.

A tiny percentage of aces come on par 4s. If you pull off that feat, you’ve also claimed an “albatross,” which is extremely rare in its own right. An albatross is also known as a “double eagle.” The bottom line is that you’re three under par on the golf hole if you ace a par 4.

The rarest of all golf shots is an almost mythical creature. An ace of a par 5 – typically one of the longest holes on any golf course – is known as a “condor.” Through 2021, there are only six known official condors in the world. It will usually take some unique circumstances for a “condor” to take place, like a shorter hole that is straight downwind or defying the setup of a hole and being able to gun for the green from the tee over hazards.

Statistics of an Ace

As mentioned earlier, a hole-in-one is pretty rare. The odds for average recreational golfers to make one is about 12,500-to-1. The better your skill level, the better the odds, but they’re still pretty steep. Amateur players with a low handicap have odds around 5,000 to 1 of putting the ball into the hole on their first shot. Finally, professional golfers come in at around 3,000 to 1. There were only 28 aces carded on the PGA Tour during the 2021-22 season.

There are roughly 450 million rounds of golf played in the United States each year, between 25,000 to 30,000 per course. With the average course reporting 10 to 15 aces per year, there’s a hole-in-one once every 3,500 rounds played. Only 1 to 2 percent of golfers make an ace in any given year. Pretty daunting.

If you manage to card an ace, you might think it’s your day, and you can do it again. Not likely. The odds of making two aces in one round skyrocket to 67 million to 1.

The odds of making a hole-in-one on a par 4 are considerably steeper than making one on a par 3, estimated at 6 million to 1.

Condors are so rare there aren’t even any estimates on how likely (or unlikely) they are.

One amateur golfer from England, Hugh Barrett, had a season any player would envy in 2022. He’s carded an astonishing four aces this year, making his most recent in October. The odds of an average golfer matching it? 10 Billion to 1. 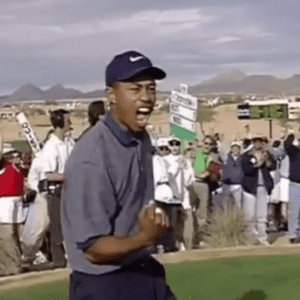 Tiger Woods has two of the more memorable aces in PGA Tour history. He made his first ace as a pro in his first pro tournament. Woods pulled it off in the final round of the 1996 Greater Milwaukee Open on the 202-yard 14th hole.

Woods also made one of the loudest aces in golf history just a few months later at the 1997 Phoenix Open. On the famed 16th hole at TPC Scottsdale, Woods carded another ace from 152 yards, much to the delight of the raucous crowd.

Louis Oosthuizen claimed one of the most memorable aces in golf history at one of golf’s most storied venues. In the final round of the 2016 Masters, Oosthuizen made the 18th hole-in-one on the 170-yard 16th hole’s history. How his ball got into the hole is what made it so memorable. Oosthuizen’s ball hit playing partner JB Holmes’ ball on the green and redirected it towards the hole, eventually dropping in the traditional Sunday hole location for an unlikely hole-in-one.

Brian Harman proved that two aces are better than one, acing two holes in the final round of The Barclays in 2015. Harman’s 7-iron found the hole on the 183-yard 3rd hole, then double-dipped with an ace on the 218-yard 14th. Harman is the third player to make two hole-in-ones in one PGA Tour round, joining Yusaku Miyazato (2006 Reno Tahoe Open) and amateur Bill Whedon (1955 Insurance City Open). Any player that makes a hole-in-one will consider it a good day. It turns out that just playing with someone that makes one can help improve someone’s day, too. The custom/tradition is for any player that aces a hole buys the next round of drinks. You’ll never feel so good picking up the check.