What is an Average Golf Score?

If considering both players with and without handicaps, the average golfer shoots over 100 for 18 holes.

According to the United States Golf Association (USGA), the average American golfer carries a handicap of just over 14.

However, not all players use a handicap system, especially those that regularly shoot higher scores, so that number of 90 is certainly too low. 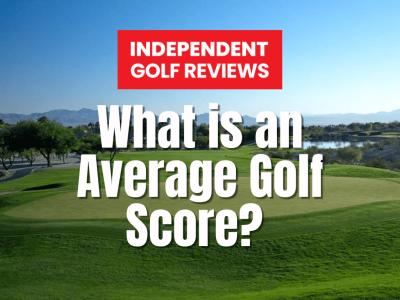 Breaking it Down: Male vs. Female

The most significant portion of golfers within a handicap range is between 10 and 15.9 for males. This range makes up almost 32% of all male golfers. For women, the most significant chunk of the bell curve falls between 23 and 31.9, as this makes up over 34% of female players.

Scores fluctuate by age, but once players reach 20 years old, the scoring average levels out. Male players from age 20-30 average right around 90. For the following four-decade age groupings, scores are very stable and only slightly higher, averaging about 91.5 per round. Once a player hits 70 years old, there’s a more pronounced increase to about 94.

The number of beginners has continued to rise since the breakout of the COVID-19 pandemic. According to National Golf Foundation data in 2020 and 2021, an average of 3.1 million new golfers hit the course, so average golf scores are likely on the rise.

A player’s score can be more simply categorized based on how they perform in certain areas on the course. The better a player is at the core aspects of the game, the better their score will be on a given day. This doesn’t mean there won’t be outliers or the proverbial “bad day,” but generally, an above-average golfer will do these things better than a 20-handicapper.

Believe it or not, PGA Tour players miss the fairway nearly 40% of the time. Of course, they’re playing on more challenging courses, from longer distances and (seemingly) more pressure, but that still seems like a lot of missed fairways.

The higher you go on the average score chart, the more fairways are missed, but it’s not as dramatic as you might think.

A scratch golfer hits a little over half the fairways played, while a player with an average score between 85-90 hits it in the short grass a little over 40%. Finally, players closer to that “average” score we’ve discussed still hit around 38% of the fairways.

Hitting the fairway might be one of the worse indicators of golf score, though. Having a clear shot in the rough close to the green is usually better than a shot from a long distance in the fairway. Getting your ball on the green in regulation is far more critical.

PGA Tour and scratch golfers perform very similarly when it comes to getting the ball on the green in regulation, pulling it off more than two-thirds of the time.

While the drop in fairway percentage between scoring groups was relatively minor, that is not the case for approach shots. Players with an average golf score of 85-90 hit just over a quarter (28%) of the greens in regulation.

The theme continues, as our “average” score golfers hit just 17% of greens in regulation per round.

Putting is a unique area because your putting statistics will improve dramatically the closer you hit the ball to the hole, whether that be with a chip or approach shot.

However, when it comes to strictly looking at how often putts are made from certain distances, the higher the average score, the less likely the ball is to find the bottom of the cup.

Studies show that a professional golfer to a “bogey” golfer performs pretty similarly on two-foot putts, but once you get past that, the make percentages vary quite a bit. Tour pros make 96% of three-footers, while the “average” golfer makes just 84%. Think about that the next time you tell your buddy to pick it up!

The bottom line is that all aspects of the game play off each other, and it’s challenging to be an excellent golfer without being at least competent in them all. However, improving your approach shots to the green is a good place to start if you’re looking to improve your golf score.

So What is a "Good" Golf score?

This is an even more loaded question, as it is all relative. It’s relative to the player’s skill level, course, and conditions.

A good score to an average weekend golfer would likely be pretty terrible for Tiger Woods or Rory McIlroy. A good score in nasty weather conditions might not be considered very good for the same player when playing in ideal weather on the exact same course.

By keeping a handicap, you’ll be able to easily see how your last round stacks up against recent past performance. If you can stay within a few strokes of your handicap for the course you played, it should be considered a good score and a successful round. Remember though, handicaps don’t take every round you play into consideration. Your higher scores aren’t included in the calculation of your handicap (only the best 8 scores of your last 20), so just because you’re over your handicap doesn’t necessarily mean it’s going to affect your handicap.