There aren’t many rockstars in Carlsbad.  You know the guys I am talking about.  The guys in the golf equipment industry with instant first name recognition to the masses.   There is a guy over on Rutherford Road that is quickly migrating his way toward the top of that list.  You may not have heard about him yet, however, Anthony Taranto in Callaway Golf’s, Pro Tour Department, is a name you’ll soon be familiar with.

Things started to change over at Callaway Golf in 2012.  Chip Brewer was appointed as the CEO and the world was introduced to the walking, talking, caricature of Callaway marketing, Harry Arnett.  Arnett proclaimed that it was the beginning of a new era at Callaway Golf, and things would be different.  He waged what he coined the “Five Year War” to regain market share in the equipment landscape.  It was marketing that changed marketing.

Taranto joined Callaway Golf in 1999, after responding to a job fair advertisement for a machine operator in their ball division.  For the past ten years, he’s worked in the Pro Tour Department, assembling clubs for their professional staffers. Equipment build sheets are sent into the tour department from the tour representatives on site at the professional tour events.  It’s Taranto’s responsibility to build the clubs to precision and get them shipped the same day the orders are received.

It’s no surprise that Taranto works closely with, Roger Cleveland in putting together a set of wedges for touring professionals.

“I work with Roger often, he will be out at an event and come to me with a list of wedges to build.  Its pretty amazing to me to work with him on wedges.  He is very cool and more than willing to answer my questions and show me how to grind wedges” -ANTHONY TARANTO

Although he works on every club throughout the bag, the wedge has become his specialty as Taranto has transformed his craft into an art.  Callaway identified a need to offer their staffers and VIP’s something different in customization rather than simple initial stamping or paint-fill variations.  They began offering sand blasted images and designs as part of their tour department portfolio as a custom option.  The result was some of the best and most unique looking personalization in the game.

“Ever since I came up with a new way to customize wedges, it’s been nonstop.” -ANTHONY TARANTO 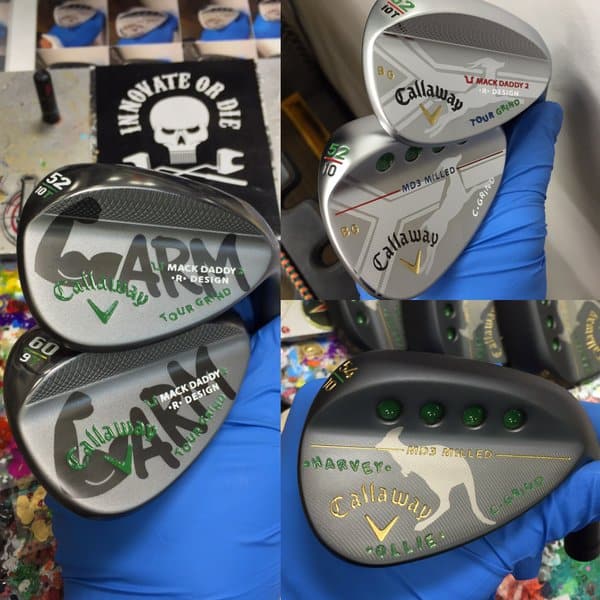 Taranto began to present these wedges and designs to the world via social media.  Everyone who see’s one, wants one for their bag, including tour players.  Soon after his Master’s win at Augusta, Danny Willett saw Taranto post some photo’s on Twitter for wedges he completed for Kristoffer Broberg, a Swedish professional golfer who plays on the European Tour.  Willet went to Twitter to request some of his own and included a “pretty please” that sealed the deal.  That same day, Taranto had some wedges on their way to Willett.  All of the communication and interaction playing out on Twitter for the average hack to read.  This is the new Callaway, and this is the new rock star.

In addition putting together these custom wedges for tour professionals, a limited number are made available to VIP’s and those being fit at the Ely Callaway Performance Center.  Callaway is presently considering offering Taranto’s designs to the general public on a limited basis and plans haven’t been finalized.  Yes, you read that correctly…tour professionals, VIP’s, and maybe even you.

“Callaway is working on offering my services to the public but they want to make sure they do it right.  There should be something happening soon.” -ANTHONY TARANTO

This past March, my family wanted to get me something special for my birthday.  They asked themselves, “What should we get The #BestLookingManinGolf?”  The answer was simple, the #BestLookingWedges in golf.  Since I am a VIP,  their inquiry to Arnett was quickly answered with a “Yes, we can do that for @Spyzinger.”  They got the job done and by six o’clock on the morning of my birthday, my two kids presented me with one of the coolest gifts I had ever received.  Customized Callaway Golf MD3 wedges designed and crafted by Taranto. 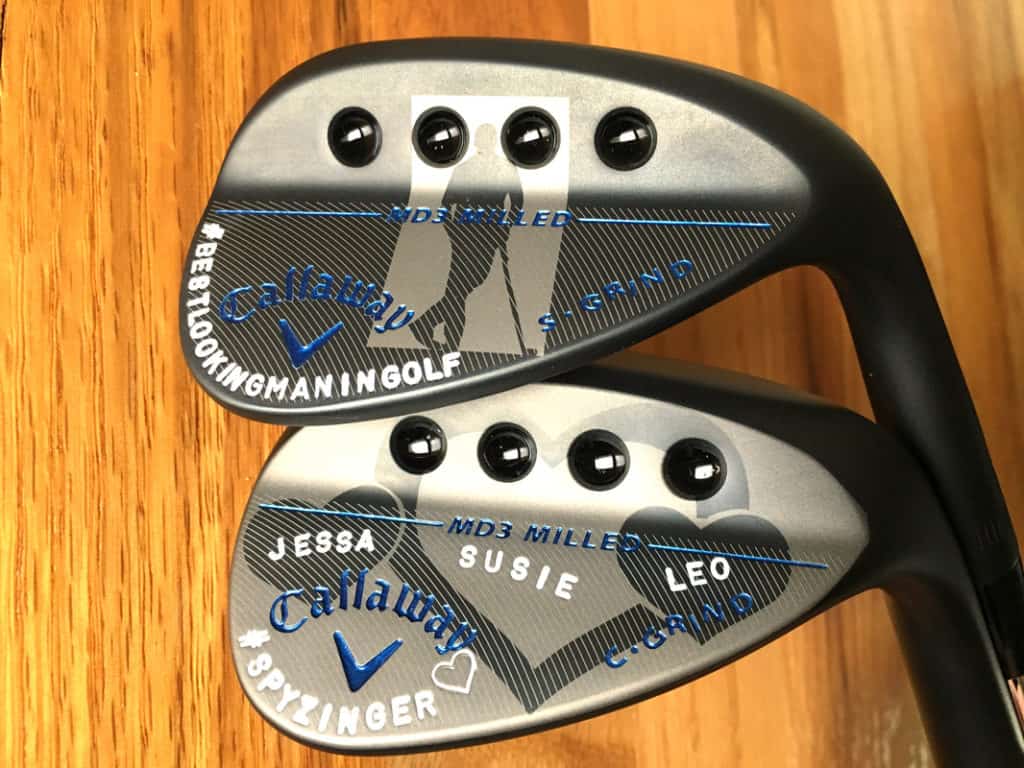 Taranto is part craftsman, part artist.  In every design he provides something unique and different that is personalized or special to the player.  Each piece that leaves Taranto’s lab is a one-off piece that is so remarkable, you’ll question whether it should be played or hung above the fireplace.

“I love my job, it doesn’t feel like work at all.  I get to build golf clubs for the best players in the world and celebrities.  The most rewarding part of my job is when a player gives me a shoutout with pictures on their social media.  It lets me know that they really like what I’m doing and that they enjoy the wedges I personally make just for them.  I really enjoy working at Callaway.  The leadership we have here is the best we have had in a long time.  Chip Brewer and Mark Leposky are such down to earth guys.  They are both in the tour department often, asking us to tweak or build new stuff for them.  They get what makes us, Callaway.” -ANTHONY TARANTO

Hey Anthony, you get what makes Callaway.  And, you’re doing a remarkable job.

ANTHONY TARANTO – WHAT’S IN THE BAG