A Simple and Fast Way to Get Distances
Everyone is talking about the pace of play in golf right now.  It seems that rounds can last upwards of 5 to 6 hours on some courses; there is no excuse for that.  Even at the local muni slowish rounds can deter golfer from playing more rounds.  There are many factors that contribute to slow play, but one I’ve seen is either the time spent trying to figure out yardages or not knowing the yardage and thus using the wrong club which leads to more shots, lost balls, frustration, etc.  The Golf Buddy Voice + is the  simplest and fastest way to get distances.
This isn’t the first “voice” GPS unit I’ve tried, but so far it has all the features I was looking for in the other units.  The Voice+ is an even more effective and efficient packaged GPS unit.  Golf Buddy offers a Voice and a Voice +.  They both offer the same basic features, while the + adds a watch feature.  You’ll have to decide how you will wear it and use it.  I liked the watch features of the Voice + especially as my son used it for High School golf.  They aren’t allowed to have cell-phones on the course, but it was nice for him to have the time as well as the yardages. 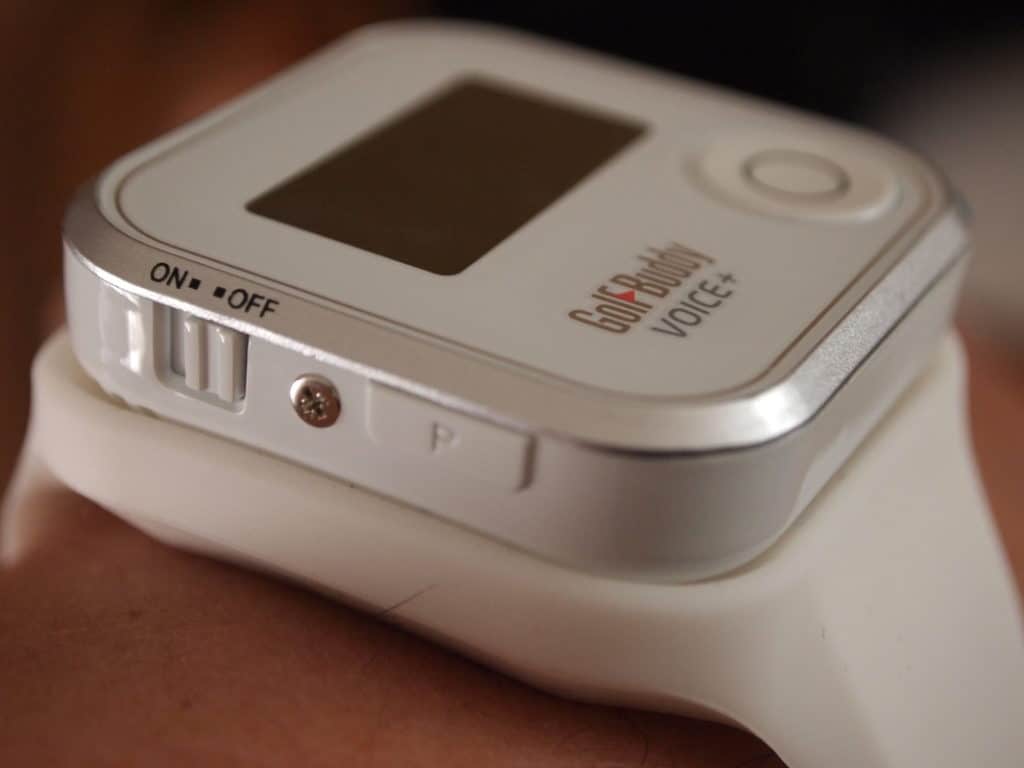 How you wear the Golf Buddy Voice + is your choice.  The watch is comfortable with the smooth silicone band, and the actual Voice + unit isn’t too big on top of it so it can worn while playing.  I gave up watches years ago so I can’t say I really like wearing any watch for anything even if it is comfortable.  I preferred to wrap it around the handlebar of my Clicgear cart or clip it to my hat.

Simplicity and Speed are going to be the biggest benefits of this GPS unit.  I charged the unit before I left home and when I got to the course I turned it on, within 30 seconds it was ready to go.  It announced I was on the first hole.  Once I tapped the button it told me the yardage and away we went.  I hit a good driver right down the middle that ended near the 150 stick.  I tapped the Voice + and it said 152, I checked it with my laser which read 154 to the middle flag.  Obviously the flag was not in the dead center of the green  The next hole was a par 5 so I didn’t bother to tap the button to find out the yardage because I knew I was hitting driver.  It announced hole 2 when I got to the box, but that was it.  It’s there when you want it, and shuts up when you don’t.

My complaint against the first “voice” GPS unit I had was the lack of a screen.  It was just uncomfortable to not really know what the unit was thinking.  This one has an easy to read, black and white LCD screen that gives you the basic information on each hole.  If you have a really sensitive playing partner that everything bothers, especially the voice, I found I could turn the volume down or off and just look at the screen as it offers center, front and back distances.  You can also have the time displayed and shot distance calculated.   During play the numbers will scroll to appropriate yardages as you move.  I also liked that green shape view on the screen in case you want to know how to approach it or where long or short safe areas are.  This unit doesn’t offer hazard yardages, but if you want that, the next unit up in features (and price) is the VT3.

My issue with GPS has always been battery life.  I’ve had some units that barely made it 18 holes.  The Golf Buddy Voice + impressed me with its 54 hole + battery life.  I charged it once and just kept using it until it was almost dead.  I realized I didn’t make the voice talk on every hole, but still impressive.  It won’t last all season like my laser range finder, but certainly an improvement over older models. 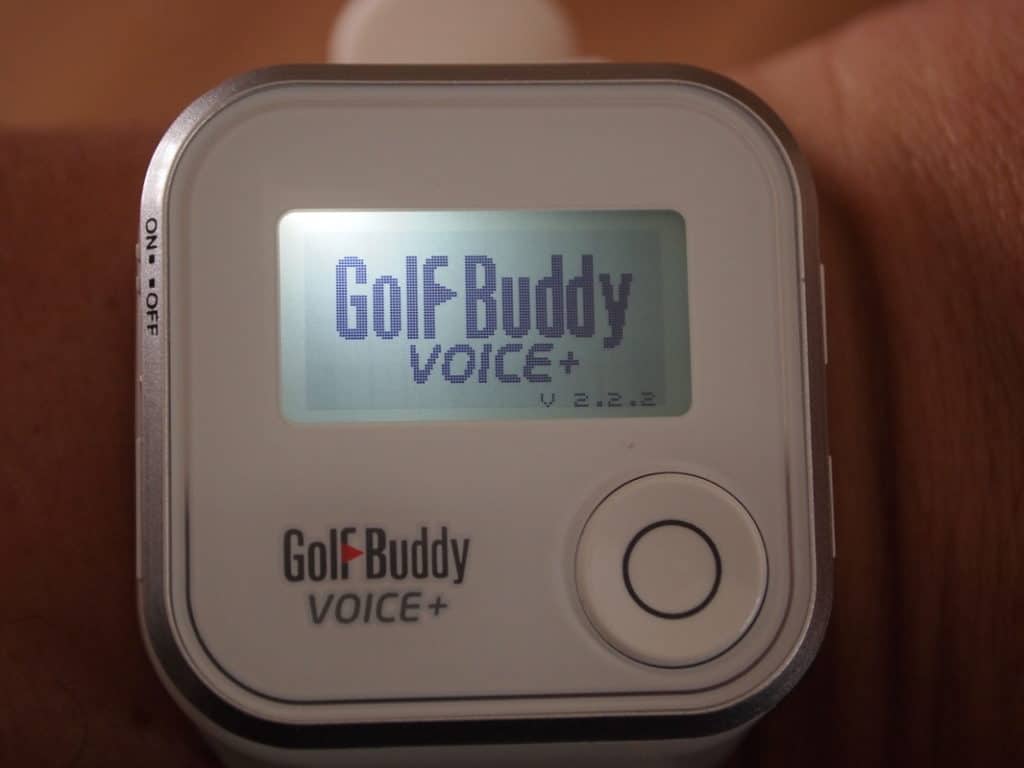 If you are looking for a low cost, simple and fast way to get yardages on your wrist or on your hat, the Golf Buddy Voice + is pre-loaded and ready to go right out of the package.  The small compact nature of this GPS and good battery life makes it a great choice.  I honestly believe it is the fast way to play golf.  There is no yardage guessing and you can get ready for your next shot while the voice tells you distances or you take a quick glance to know exactly what you need to hit.  The Golf Buddy Voice + is a simple and fast way to get distances.