How Much Do Caddies Make?

Caddies that work at country clubs and golf courses and carry recreational golfers’ clubs commonly make between $100 and $140 per bag they carry.

Caddies for professional golfers, specifically those on the PGA Tour, make a base rate of $1,500 to $3,000 per tournament, plus a percentage of the player’s winnings.

Below you will see how a PGA Tour caddie differs from caddies available to the public. Their wage structure and range are entirely different. 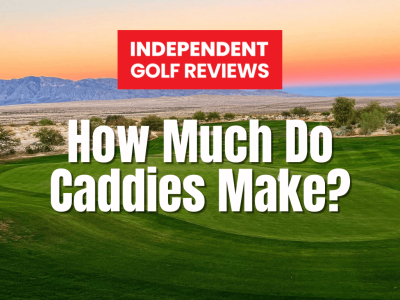 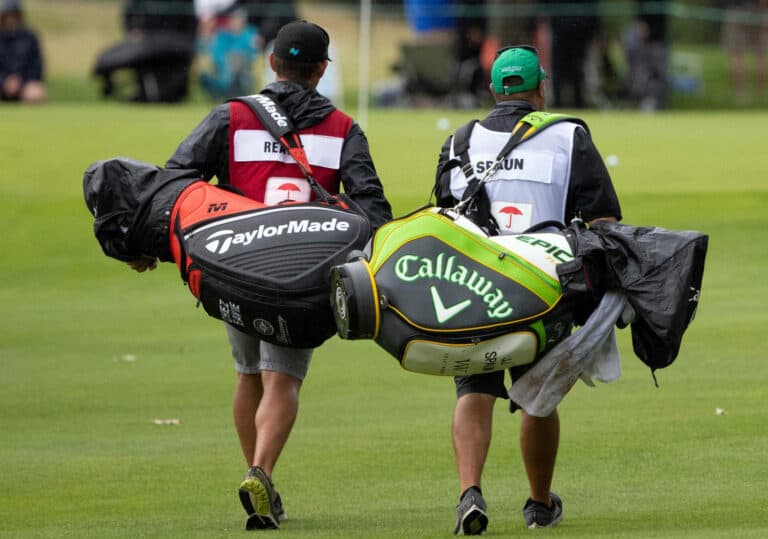 Professional golf has many standard practices for determining the pay a caddie receives from the player who employs them. However, the specific details are something the two negotiate when deciding to work together. Like any other working relationship, both parties look at what the other has to offer and how much they should be compensated for their services.

A PGA Tour caddie’s salary consists of two parts. First, the caddie receives a regular base salary to work for a player, usually between $1,500 to $3,000 per tournament. This is important because most PGA Tour caddies pay their travel expenses, including lodging, food, etc. The caddie is making financial investments in each tournament played, just the like the player.

The next portion – and the most lucrative – comprises of a percentage of the player’s winnings. The higher a player finishes, the more prize money he can make and the more significant portion of that amount a caddie earns. Of course, missing the cut means the player and the caddie do not make another dollar in prize money that week.

While these figures can be different based on negotiations, the most standard figure is that the caddie of a tournament’s winner earns ten percent of what the golfer wins. That’s a pretty good chunk of change, as the average value of a win on the PGA Tour during the 2021-22 season was just over $1.64 million.

Outside of a victory, there’s a little more variance in what a caddie earns. The expected average rates include seven percent for a top-ten finish and five percent for any other finish. That means a caddie’s weekly pay can fluctuate quite a bit. They can go anywhere from just earning their base rate if the player misses the cut to between an additional $1,000 for an average last-place finish and $164,000 for a win (even more for higher-profile events). So how a golfer performs greatly impacts a caddie’s weekly salary. That gives you a good idea why caddies are also very happy when a putt to win a PGA Tour event drops.

Extrapolate it out over the course of a season, and caddies for the best players in the world can do very well. Meanwhile, carrying the bag for fringe PGA Tour players might result in a yearly salary that doesn’t enter six figures.

What a Caddie Does for a Professional Golfer

While it’s the most visible thing, caddies for professional golfers do quite a bit more than carry the golf clubs and handle other golf gear. Now more than ever, players refer to themselves and their caddies as a team, and caddies can be vital to a player’s performance. Many caddies have experience playing high-level golf and can easily relate to the player they work for.

Outside of the routine maintenance of the course – raking bunkers, fixing divots and ball marks, replacing flagsticks, etc. – and the player’s equipment – cleaning clubs, cleaning golf balls, keeping grips dry, etc. – a caddie is a friend and a coach. The relationship between a caddie and the player can be very diverse. A caddie may need to be able to say something to calm their player down or to light a fire under them. The best caddies in the world know what their player needs to hear. A caddie ensures the player has everything needed while playing or practicing, whether that be equipment or information related. Caddies provide yardages to various golf course locations along with details about the conditions being played in. All that information leads players to decide what kind of shot to play and what club to hit. Professional caddies need to be prepared for all situations during a tournament. Some caddies serve as a sort of bodyguard for their player while on the course. Steve Williams, former caddie for Tiger Woods, was very authoritative when controlling the large galleries around the world’s most popular player. Woods won 13 of his 15 major championships with Williams, so the relationship clearly worked well.

All the technical things PGA Tour caddies do for PGA Tour players are the same things a caddie will do for a recreational player. Many country clubs and higher-end courses will make caddies available to the general public.

A caddie will carry the golfer’s bag, rake bunkers, and provide yardages. Caddies can be especially helpful if the player is unfamiliar with the course, as the caddie will have expert knowledge, especially on and around the greens.

Caddies can make a player’s experience more enjoyable by simply taking some of the physical tolls off a player and removing some guesswork from a player unfamiliar with a course.

The cost to hire a caddie can differ quite a bit from course to course and the relationship of the caddie to the course. While some courses pay caddies to work there, other caddies are setup as individual contractors, allowing them to set their prices to be hired by players. This relationship may also impact how the cost of a caddie is described, with there being a required, non-negotiable caddie fee (paid to the course) plus optional gratuity (directly to the caddie) compared to a single recommended price (directly to the caddie).

Most courses have a suggested gratuity or recommended single fee, but if you had an excellent caddie that enhanced your golfing experience, you should feel free to give more. Considering all that, the average caddie will make between $100 and $140 per bag per round. Many caddies will opt to carry two bags, when possible, to help increase their pay.

Requirements and Suggestions When Using a Caddie

Some courses, like the 2020 Ryder Cup host Whistling Straits, require golfers to use a caddie when playing there. When playing at a golf course that offers optional caddies, requesting one in advance when making a tee time is required.

Many recreational players may only experience playing with a caddie on special occasions, so it can feel a bit unusual. Remember that the caddie is working for you and are there to help you enjoy your round of golf. Those caddying for recreational players know they won’t hit it like PGA Tour golfers, so don’t be nervous about how you play. Listen to the caddie’s advice and be honest about your skill level to maximize your chances of playing your best.