A “Scramble” is a where each golfer hits their ball throughout the match and the team captains choose the best shot and use the same spot for each player.

“Best Ball” is when each player on the team plays his or her own golf ball throughout the hole and the team uses the lowest score on the hole. 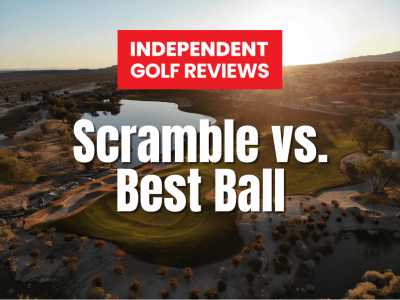 Rules of a Golf Scramble

The golf scramble is designed more for the casual golfer, as poor shots are much less likely to impact the team.

If you’ve ever played in a charity or business golf event, odds are you played in a scramble format.

Scramble teams usually consist of two or four players, but you can play a scramble with any number of people.

The basics of a scramble are that every player gets a chance to hit every shot, and the best result of all team members is used as the official shot. This format is used until the ball is in the hole.

Count all these “official” shots to get the team’s score for the hole and, eventually, the round.

Here’s a more detailed example of how a hole is played.

Every team member hits a tee shot on every hole in a scramble. The order of play within a team does not matter and can be different on every shot.

After each team member hits their tee shot, the team picks which tee shot is the best for their specific holes situation.

Any player’s ball that isn’t selected can pick up their ball. The team then meets at the location of the selected shot. That is the team’s “first shot,” and all team members will now play from that spot.

Some events will also prohibit teams from using the club length to improve their type of lie. For example, if the selected shot is in a bunker but within one club length of the rough, teams would have to stay in the bunker. Moving from the bunker to the rough would be a disallowed lie improvement. Check the rules of the event you’re playing in to see what is and is not allowed.

After all members have hit the team’s second shot, the team again selects the best shot to use, contributing to the team’s score. This process continues until the team’s ball chosen is on the green.

Once on the green, mark the selected shot with a ball mark. All players again will have a chance to putt from that spot, with the best putt being chosen. If all players miss the putt, select the best result, mark the ball, and continue with the same structure.

If a player makes a putt, the remaining team members no longer have to putt.

Count up all the selected shots to get your team’s score, move on to the next hole, and do it all again.

As described earlier, scrambles usually consist of two or four-player teams, with each player hitting once from each chosen location. However, there are variations of scramble tournaments that allow a player to hit more than once from each location.

The first way would be when playing something called a one-person scramble. This means you are your team and get multiple tries from each spot, selecting the best result until the ball is holed.

Another scramble variation is if your team has fewer members than the event calls for. If you have three players in a four-player scramble, one of your three players may be allowed to hit a second time from each location. This prevents the team from getting two shots from the best player each time. The player to hit additional shots will likely have to rotate between the group. Once again, check with tournament organizers for rules before any tournament.

Scrambles allow less skilled golfers to be part of a winning team without feeling the pressure of having to play every shot they hit. Players that might not have a well-rounded game, but a specific aspect that is excellent, can significantly enhance a team’s success. Scrambles encourage collaboration and teamwork, as players all hit the same shots and get a chance to contribute.

Scrambles also allow players to be more aggressive, as poor shots aren’t likely to be used. Teams can strategize their playing order to allow for more aggressive shots that wouldn’t usually be tried under regular play. For example, a team’s longest/best driver can tee off last on a short par 4. Once a teammate has a ball in play, the longest player can take a shot at driving the green without fear.

Scrambles are a real benefit on the putting greens. After the initial player putts, the rest of the team can get reads on what the putt does and feedback from the player that just hit. This is another primary reason scramble scores are typically much lower than any other team format.

The best ball format is about as simple as playing the game normally, even if the name is confusing.

Unlike a scramble, where you take the best shot each time, the best ball format refers to the best score made by an individual player on each hole.

Like scrambles, best ball teams usually have two or four players. However, there’s no limit to how many players are on a team.

In a best ball, every player on a team plays their ball for the entire hole, trying to make the lowest individual scores they can.

The biggest difference between playing a four-person best ball format and playing with three of your friends on a random Sunday morning is that your score might never count. The lowest score on each hole is what is used for the team’s score, unlike when you’re only playing for your score.

A more subtle difference is that playing in the team format could allow players to be more aggressive.

You are part of a four-person team and make a 5 on the first hole. Meanwhile, one teammate makes a 6, another an 8, and another a 4. Your team score is a 4, as 4 was the lowest score by anyone on your team. This continues until all holes of the round are played. Add your single score from each hole to get your team’s total score.

Some variations might make scoring a little less straightforward. Handicaps can be used, where players might get strokes taken off their score for a hole, making their net score the best on the team.

Another playing variation is when you’re not playing alongside the rest of your team. This makes things interesting because you do not know if your score is going to matter or not. Depending on how you look at it, it can add or remove some stress to the game. Some would argue that playing with your teammates can be more stressful, as you know the team is counting on you after they all hit tee shots out of bounds.

Best ball is an excellent format for players who always want to keep their own scores. It allows them to play their typical game and quantify how well they played individually. Players won’t try to pull off shots they’re uncomfortable with, helping them stay within their game.

Best ball is also less complicated than a scramble. You play your ball like usual without ever having to consult with your team members on different options.