A Launch Monitor for $350?? Really
You know that Launch Monitors cost thousands of dollars. Companies like TrackMan, Flightscope and Foresight sell them from 25K to 5k. So is it possible that Voice Caddie can sell a “real” launch monitor for $350? Obviously it can’t do the same things that those professional launch monitor do, but it has some real potential for the golfer that wants to make more of their time at the range. Many golfers claim to be “Ranger Ricks” or “pros” at the range, but struggle to take it to the course. Some of that is due to perceived untrue distances and results at the range. The range is wide open and the distance markers are less than accurate from where you are actually hitting. Using a Voice Caddie Swing Caddie 2 can really improve your range time without spending thousands on a launch monitor.
I took my Voice Caddie SC200 Swing Caddie 2 to the range along with my FlightScope Xi+ Tour Launch Monitor.  I put them side by side and started hitting balls.  I started with some 9-iron shots, then moved to some 6-iron shots, then hit some driver shots.  I found almost identical carry numbers with the 9-iron and 6-iron, but a few discrepancies with the driver.  The other numbers that the Swing Caddie 2 shows are: Swing Speed, Ball Speed and Smash Factor.  Those were relatively close for the irons, but again slightly off with the driver.  Since the Swing Caddie 2 only tracks things in the small area around the device, and doesn’t actually track the ball on the face or once it is down range which sometimes means it can be tricked by poor contact.  Since it uses a math equation to calculate the distance rather than tracking it all the way down the range. 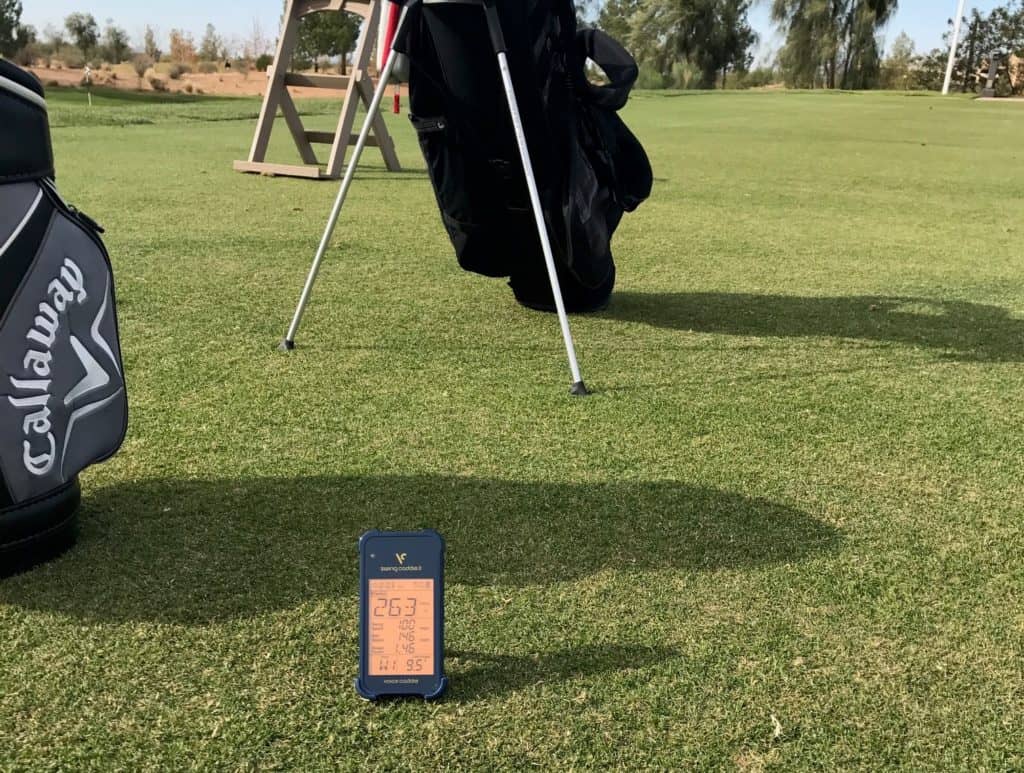 The Voice Caddie Swing Caddie 2 is about as easy as it gets to set up.  Install 4 AA batteries, turn it on and then set it 4.5′ behind the approximate place you’ll be hitting from.   It doesn’t have to be exact, there is some wiggle of a foot or so, but obviously if you get too far away it won’t work or too close you could hit the unit.  The remote will make it really easy to select the club you are going to hit and then the actual loft of that club (if you know it).  From there it is just swing away in the practice mode and it will keep track of your shots.  You can have it on silent and just look at the numbers on the screen or you can turn the volume up and it will tell you them.  The slim remote fits in your pocket nicely and then you can just select a different club and swing away again.  Very straight forward and easy to use.  Also because of its compact size, it fits in any pocket of your golf bag and will be ready to go the next time you head to the range. 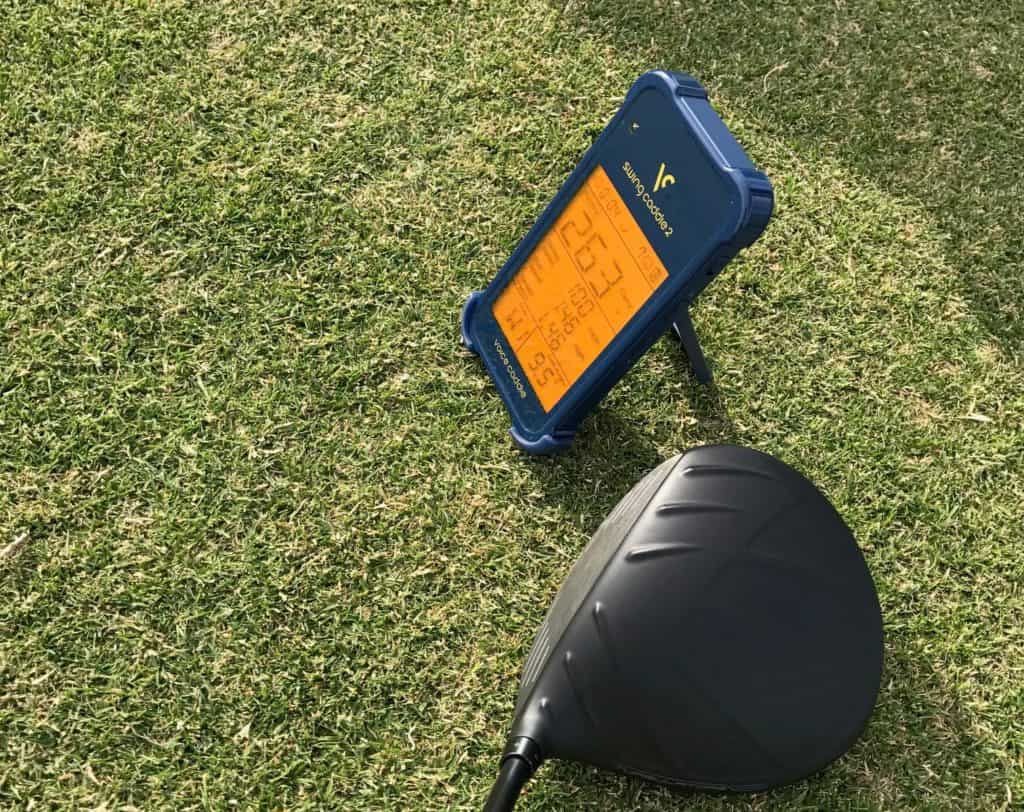 The Swing Caddie 2 has some other modes that will also make your range time more productive.    The Target and Approach modes can turn a dull range session into something fun and beneficial for your game.  The Target mode allows you to set a distance and then try to hit it with the next 10 shots.  This can really help you dial in distances.  My favorite practice tool for the range was the Approach mode that gives you random distances to try and hit with one shot.  Much more like playing on the course.  You don’t hit 25 shots with a 7-iron in a row while playing so doing so at the range isn’t always helpful.  Switching clubs and trying to be precise will translate into better approaches on the course. 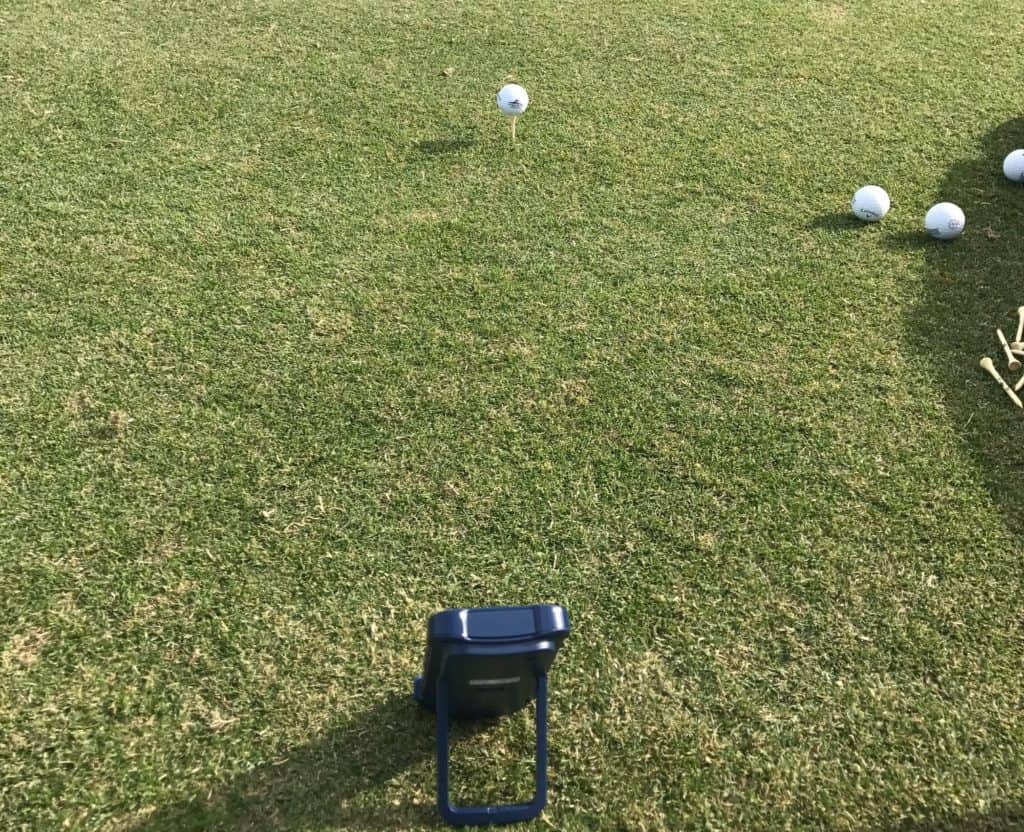 While the Swing Caddie 2 can improve your range time, it isn’t full blown launch monitor.  It can do a few things well, but it isn’t a fitting tool.  The numbers are too limited to tell which driver might be the best fit.  It doesn’t offer enough launch information.  There is also no dispersion measurements either.  The lack of spin numbers or total distance can also be deceptive from a fitting standpoint.  So don’t think that you can use this to do a self-fitting or replace a high-end launch monitor because it doesn’t offer enough launch numbers to do those things. 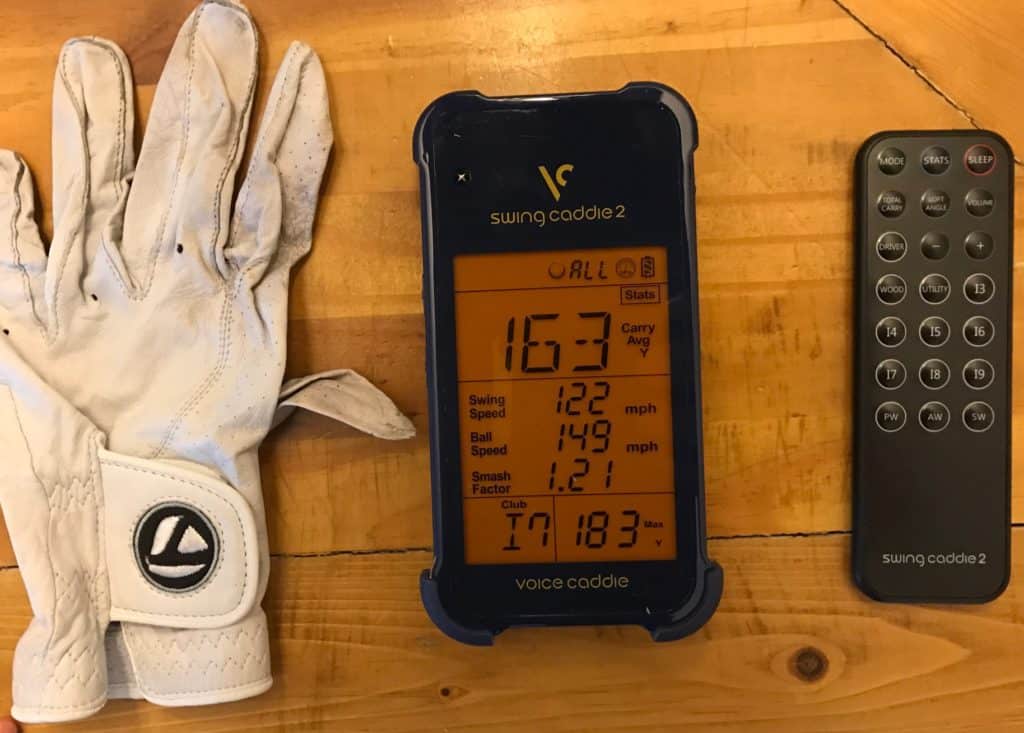 So is the Voice Caddie SC200 Swing Caddie 2 a real Launch Monitor?  In some ways it does a great job of giving accurate carry distances and makes your time at the range much more productive, but it doesn’t offer enough details or accuracy to replace the ones that cost thousands of dollars for fittings or more detailed information.  Yes I understand not every has the cash or access to that type of launch monitor.  The Swing Caddie 2 can’t replace those launch monitors, but it can serve a real purpose for you game, especially dialing in distances.  If you mindlessly pound golf balls at the range, this is a must have to improve your game by knowing your distances and mixing it up your practice with the Target or Approach mode.   So for $350 you can get some pretty good information about your swing and clubs out of this launch monitor.

Quick Hits
+Compact and easy to use
+Accurate carry distances, especially with irons
+Target and Approach modes are great for range sessions
+Will improve your practice time
+Voice and visual display is clear

–Limited information: no spin, angles or dispersion
–Can be tricked by mishits

Independent Golf Reviews is reader-supported, when you buy through links on our site, we may earn a commission.
SITE INFO