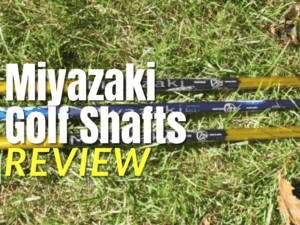 This is my official review of the Miyazaki Golf Wood Shafts .

I used the Black, Blue, Silver and Indigo shafts!

These are my thoughts on their performance and which one would be right for you based on your current golf game!

Miyazaki is a new exclusive line of shafts that come from a Japanese company with over 20 years of shaft making experience.  Their drive and attention to detail on each shaft is said to create the most consistent shafts.  They also use detailed flex coding, creating the ability to specify each area of flex for optimum launch angles and ½ flexes.

The Kusala line has artistic flair to match with the themes of ice, water and steam.  The previously unknown artist Kusala designed a trio of the most stunning shafts on the market.  I like how they are all very similar in color scheme and tone, but just the subtle changes to differentiate as you get near the tip section of each shaft which shaft(launch angle) you are playing.

Just over a year ago I did a review of the Miyazaki Kusala line and was really impressed by the international flex code, the crisp feel and the low spin.  For 2012 they added 2 new colors to the Kusala line the Indigo and White.  The Indigo fits between the black and blue, while the white is higher launch and spin compared to the silver.  So from lowest to highest it goes: black, indigo, blue, silver, and white.  I was really impressed with the low spin qualities of these shafts, the great looks, and their consistency.  The Indigo combined my favorite qualities of the black and the blue and maybe the best Miyazaki shaft yet.  The black is so low, that it was really too much for me.  The blue on the other had was really good, but I would have liked to have it with just a little lower spin.  Thus the Indigo was made for me (not really, but it feels like it).  It is the mid launch of the blue, but the super low spin of the black.

On the course this shaft was amazing.  It was a true bomber.  I installed an r11 tip to compare it to the other shafts I have tested and this shafts is definitely one of the longest shafts I’ve hit.  I think it gave my optimal numbers.  I also think the new flex code that was the same for all areas of the shaft felt just a hair smoother than the other lines.  It went from al dente to al perfecto.  If I had the option to order a custom shaft in a new club, this would definitely by one of my first choices. 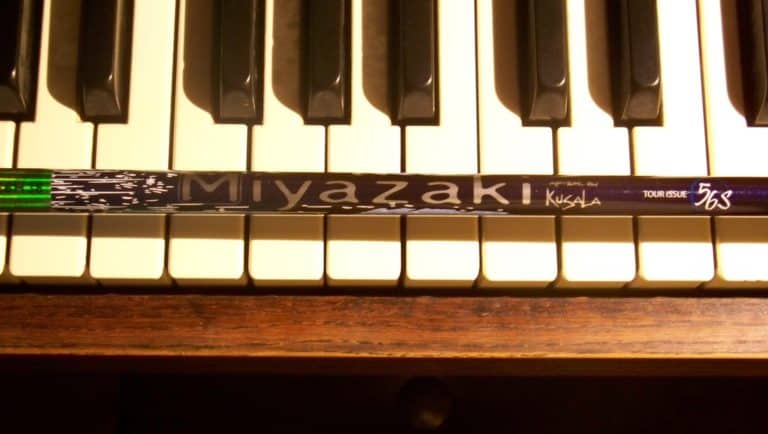 As is my practice with reviewing shafts (Black, Blue and Silver shafts), I I-mixed each shaft to play in my FT-9 driver.  This allows me to maintain a constant while comparing these shafts.  I know and understand how this head is going to react which allows me to really focus on the feel and performance of the shaft.

Miyazaki went the 3-pronged approach to shafts, low, mid and high launch shafts.  This, in my opinion, is the way that all shaft companies should produce a line of shafts.  This allows the consumer to pick what they need and install accordingly.

I started by getting the middle point by hitting the Blue (water) first.  On my first swing I found almost ideal launch conditions for my needs.  It had a very consistent climb as it went out toward the fairway.  It reached a flat apex about 1/3 into its flight.  It stayed at a mid-high flight until the last 1/3 where it made a gradual descent to the fairway.  Think of this as kind of a trapezoid type trajectory. It looked and played to be a relatively low spin shaft.  I had virtually no issues with sidespin on this shaft.  Very straight, very accurate, and quite long.  This great performance was coupled with an “al dente” feel.  It was smooth yet crisp.

I next moved to the Silver (steam) shaft.  I wanted to see how much higher this shaft would hit compared to the Blue.  I found that this shaft did just as planned.  It went higher, but still was low spin.  I think the height came right off the face.  It climbed much quicker and faster than the Blue.  Think of this as more of a rainbow sort of trajectory.  It went up faster and came down a little steeper.  But that higher launch also meant a little longer carry, but less roll out in the fairways.  Now these early spring rounds were a little on the wet side so I didn’t get much roll with this shaft.  This shaft too offered very little sidespin and that same “al dente” feel.  As far as carry distance goes this was the longest.

Lastly, I hit the Black (ice) shaft.  I went from high to low with just the click of the I-mix wrench.  This shaft gave me that frozen rope sort of ball flight.  Low launch and low spin.  It was awesome as the late afternoon winds were picking up.  I even had some roll out on the soggy fairways.  This shaft too kept the ball consistently in the fairway with that same “al dente” feel. 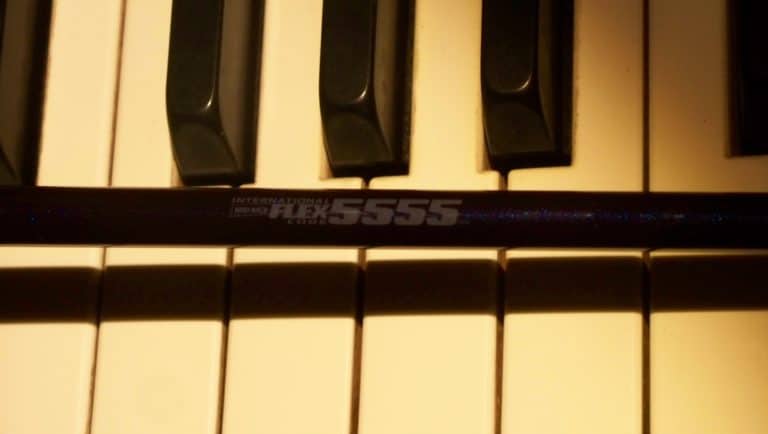 These three shafts allowed me to really enjoy the I-mix system because I could go from low launch to mid to high in just seconds.  The flight chart while different is not extreme.  It was not worm burner low to calling down rain high, but all just a variation of mid-low, mid, and mid-high.  I was guess, (no real numbers) that between the Black and the Silver there was maybe 25 feet of difference, with the Blue really right in the middle.

There are three main factors in my mind that set these apart from the other high-end shafts on the market.  The first has to be that great crisp “al dente” feel in each shaft.  No wet noodles or boards here just a tight crisp feel on all three.  The second has to be the low spin factor for even the highest launching.  Obviously, even less as you worked you way down in launch but still the higher launching shaft was still low spin.  Many have said that the Black is about as low of spin you can find on the market.  The third factor has to be the flex codes on these shafts really allow a club maker to dial them in to even the ½ flexes.

If you are in the market for a new high-end shaft and want a little tighter feeling shaft that will kill spin these are worth checking out.  I was really happy with consistently finding the fairway with these shafts early on in the spring.  There is a reason a number of pros are winning with these shafts.

Miyazaki burst onto the golf shaft seen earlier this year with the Kusala line of shafts.  I found them to be crisp, low spin and very straight.  I was very happy with the results and enjoyed my success when playing the 72gram shafts in my driver.

The C.Kua line is built on that success and includes many of the same characteristics of the Kusala line, but drop significant weight to increase clubhead speed yet maintain consistency.  The line includes a 39g, 43g, 59g, 72g(tour only) shaft.  I only dropped down to the 59g shaft and also tried the 72g shaft.

I will admit, I’ve only had limited success with any sub-60 gram shaft.  I just seem to get out of tempo and struggle to hit the ball consistently well.  I wasn’t sure if the big drop down to a 39g shaft would be too much so I opted to take a baby step and only go down to the 59g shaft.  I’m happy to report that the 59g shaft worked as well as any 70g shaft I have ever hit.  What I really enjoyed was the lightweight allowed me to load the shaft easier and swing smoother.  I played a couple rounds in some cooler weather and really like the lighter shaft.  My stiff body appreciated the lighter weight too.  I didn’t miss a beat with this shaft.  I hit mid high soft cuts with this shaft.  It played very similar to the Kusala blue shaft I have.  Being that I I-mixed both shaft I could go back and forth on a couple of holes and at the range and got very similar results, only the C.Kua just seemed easier to do it with.  That being said, when I got too aggressive the Kusala seemed too smooth out my tempo more than the C.Kua. 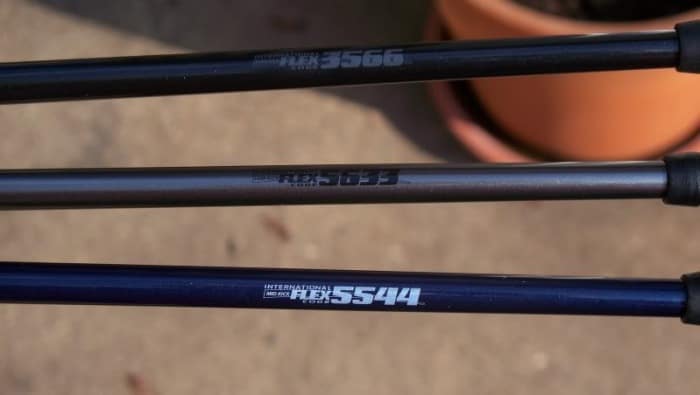 The C. Kua 72g in an x flex which was just a touch much for my swing speed.  I seemed to hit pretty big fades with this shaft.  It did feel nice and I was still able to get th ball on a nice trajectory, but I just didn’t have the speed to keep it straight.  I did have Mr. Divots hit it a few times with pretty good results.  I think it would make a great lighterweight fairway shaft for the strong golfer.

The look of this shaft is OK.  I loved the Kusala line, and the logo graphic of the C. Kua line are great, but the gold shaft with the dark blotch of C.Kua just isn’t my favorite.  It will certainly stick out on tour though.   You will quickly notice the Cleveland staffers that are using this shaft, but since the bar was set so high with the Kusala line, this one is just OK.

I got the same crisp feel of this shaft as I did previous Miyazaki shafts.  Spin was on the low side too just like the Kusala line.  The trajectory of the C.Kua shafts were between the blue and the silver with a slight tendency to fade.  I read that this is by design.   I found their claims to be true.  I did hit some really nice drives with this shaft.  I’ve had some of my better driving days while this was in the bag.  The international flex code printed near the tip of each shaft allows club fitters and golfers to get a precise fit everytime.

If you can maintain your tempo and swing, go with the lower weights yet. (I’ve seen spy pics of the  Cleveland launcher HB driver line which has the C.Kua shafts stock, they look really nice.) There is no doubt you should be able to swing it faster.  Faster = Longer with a crisp consistent feel to go with it.  Miyazaki has a very solid line up of shafts.  More traditionally good with the Kusala and the new lightweight good with the C.Kua.

Get Miyazaki Shafts on eBay here.

Get Golf Discounts & Giveaways from the top brands and stores in golf.

Sign up below to be automatically entered in this months giveaway. 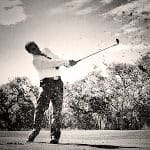 Ryan Heiman – Founder and Head Author of Independent Golf Reviews
Ryan has over 10 years of experience testing and writing golf reviews of nearly every brand out there.
HCP: 3
Read more…